Skeleton Knight In Another World Wiki
Register
Don't have an account?
Sign In
Advertisement
in: Characters, Female Characters

Ponta (ポンタ) is a main character in the "Skeleton Knight in Another World" series. She is a "Ventu-Vulpis", also commonly referred to as a "Cottontail Fox", a spirit animal that is Arc's partner. 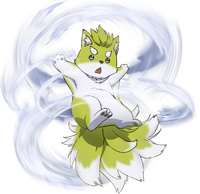 A small green-furred fox, with a body structure similar to a flying squirrel.

A cute fox, Ponta is also a known glutton and would beg her owner for any new delight that caught her interest. Despite her playful attitude at times, Ponta is quite intelligent and able to adapt on the spot, depending on the situation such as when Arc pretended to be an empty suit of armor while infiltrating a noble's residence to avoid detection. In response, the fox played along by pretending to be a plumed crest on his helmet. Though spirit animals are well known to be mistrustful of those with malignant and unknown intent, Ponta's appetite can sometimes override the fox's caution and distrust.

Humans from Diento captured Ponta, wounding her in the process. They used her to lure elven children from the outskirts of the Great Canada Forest and capture them.

The fox was captured by humans just outside of Diento to be used as a lure to attract elven children by slavers. Arc having come across the slavers' den found her caged after he took care of her captors. Initially, she was mistrustful of the knight, but after Arc healed her wounds grew attached to him. She became his constant traveling companion.

When Arc found Danka Niel Maple lurking just outside town, the elf initially wanted to attack him, but refrained as Arc only wanted to talk. Upon seeing Ponta with Arc, the elf's wariness lessen as a spirit animal in his company seen to indicate he was an ally or at least not an enemy. Her presence also convinced elves such as Ariane and her superiors to trust Arc leading to his solidification as an ally to the Great Canada Forest.[1]

Later after he assisted Danka and Ariane attack the slave warehouses in Diento, he came across Chiyome. Initially taking him as an enemy, the ninja was about to fight him, but seeing Ponta with the knight caused her to halt. Knowing full well that a spirit animal would never ally itself with a human unless it earned its trust, the ninja lessened her tension and provided the knight intel on additional elven slaves that were sold by the marquis. Together with Arc and Ariane, Ponta infiltrated the residence of Tryton du Diento and freed the two captives there as well as liberated some treasure from the place.[2]

Ariane brought the two to Maple where they were introduced to her family.

Ponta is capable of gliding through the air thanks to the fleshy membrane between her limbs and has the ability to use wind magic.

Ponta has been Arc's ever constant traveling companion since the knight rescued her from human slavers.

Community content is available under CC-BY-SA unless otherwise noted.
Advertisement